Beginning Monday, Aug. 15, riders will have another advantage to choosing Trinity Metro TEXRail to the airport. Five of the TEXRail stations – three in Fort Worth and two in North Richland Hills – will have designated parking for only $5 a day.

“This is great news for travelers,” said Chris Nettles, Trinity Metro Board Member and Fort Worth City Councilmember. “Long-term parking is something riders have been wanting, and I am so happy to see Trinity Metro making it happen.”

Tito Rodriguez, Trinity Metro Vice Chair and North Richland Hills City Council Member, said, “We anticipate this will bring more ridership to the already popular TEXRail. People who currently ride will love this new option, and others who haven’t tried it may do so now that we’re offering economical parking.”

Customers will be able to make reservations and make payments on the Ace Parking app for Apple or GooglePlay.

Some of Fort Worth’s favorite eateries offer a $6 Specialty Burger the week of August 22-28. You can dine in, order to-go or even have your burger delivered from some locations. On Friday, Aug. 19, there will be an Official Passport on the Fort Worth Burger Week web page for you to navigate your way through Fort Worth Burger Week.

Check out all of the Burger Week locations you can reach using Trinity Metro buses and ZIPZONE.

The Bell route, which connects at the Trinity Railway Express Bell Station, will discontinue service at the end of the day on Aug. 31.

Bell Textron subsidized the route for their employees to travel between the train station and work. The agreement between Trinity Metro and Bell Textron was not renewed at Bell’s request.

(FORT WORTH, TX – Aug. 1, 2022) – Riding TEXRail for your next family vacation or business trip is now even easier. Beginning Aug. 15, TEXRail is offering long-term paid parking at five of its stations. The cost will be $5 per night. On average, each of the stations will have 20 designated spots for long-term parking and those spots will be marked with painted numbers and corresponding signage.

Customers will be able to make reservations and make payments on the ACE Parking app for Apple or GooglePlay.

(FORT WORTH, TX – Aug. 1, 2022) – Riding TEXRail for your next family vacation or business trip is now even easier. Beginning Aug. 15, TEXRail is offering long-term paid parking at five of its stations. The cost will be $5 per night. On average, each of the stations will have 20 designated spots for long-term parking and those spots will be marked with painted numbers and corresponding signage.

Customers will be able to make reservations and make payments on the ACE Parking app for Apple or GooglePlay.

With a forecasted high temperature of 110 degrees and an excessive heat warning issued by the National Weather Service, the hot weather could have an impact on Trinity Metro rail services this afternoon. The most likely scenario would be heat restrictions on speed, which means that TEXRail and Trinity Railway Express would operate at reduced speeds, which will likely generate schedule delays. The anticipated timeframe is 2-7 p.m. today. Similar conditions are expected tomorrow as well.

(FORT WORTH, TX – June 16, 2022) – Trinity Metro services will be adjusted for the Independence Day holiday on Monday, July 4. TEXRail, ZIPZONE and The Dash will operate on their regular schedules.  Questions? Call 817-215-8600. 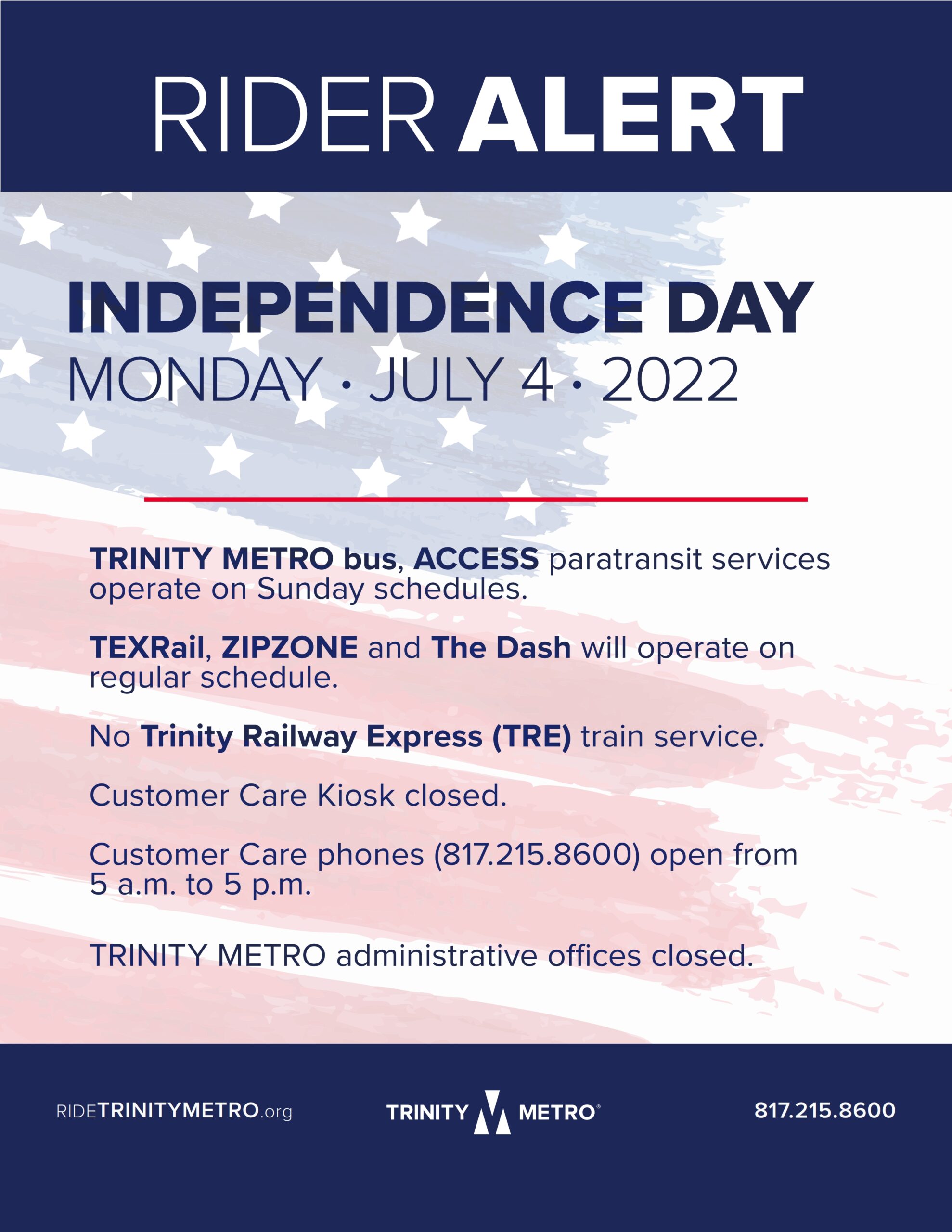 Sunday, June 19, marks the second time in history that Juneteenth will be celebrated as a national holiday. Thanks to the tireless efforts of Fort Worth’s Opal Lee, Juneteenth became a federal holiday on June 17, 2021. At age 89, she received the gift she’d wanted for decades.

During her years of activism and yearning see it recognized as a federal holiday, she would walk from Fort Worth to Washington, D.C. This year, at age 90, she will continue her tradition of walking 2.5 miles to represent the 2.5 years it took the news of freedom to travel.

Attend Breakfast with Dr. Opal Lee, which is held prior to the walk and begins at 8 a.m. Saturday at Evans Plaza.

Visit the I AM JUNETEENTH Festival, which runs 2-10 p.m. Saturday at Panther Island Pavilion.

Celebrate culture at Juneteenth at the Kimbell Art Museum, which features a special exhibit on The Language of Beauty in African Art. Admission is free 12-5 p.m. Sunday.

The history of Juneteenth

Juneteenth is an annual commemoration of African-American freedom that is celebrated with community gatherings, parades, festivals and other special events. The date of June 19 marks the date in 1865 when word reached Texas that slavery had ended. President Abraham Lincoln issued the Emancipation Proclamation in January 1863, but the information didn’t make it to enslaved African Americans until 1865.

Texas was the first state to recognize Juneteenth as a holiday.

(FORT WORTH, TX – June 2, 2022) – Trinity Metro has launched a new live webcam to give everyone a new perspective on train activities in downtown Fort Worth. To see what’s happening any time of day, tune in to our train cam page.

A view from the top: What you’re seeing

Watch the activity of three passenger train lines and numerous freight trains in real time, as Trinity Metro shares live webcam video of Fort Worth Central Station with a view from the president and CEO’s office window. The perspective is from the top floor of Trinity Metro’s headquarters at Grove and 7th streets. The camera operates around the clock to provide a bird’s-eye view of Trinity Metro trains, plus Amtrak and freight.

Passenger tracks are numbered 1-3 from RIGHT to LEFT.

You’ll see all Trinity Metro TEXRail trains and some Trinity Railway Express (TRE) trains here. TEXRail, a commuter rail line between Fort Worth Central Station and DFW Airport Terminal B Station, is owned and operated by Trinity Metro. You can immediately identify these trains not only by the track, but also by their bright red doors. If you zoom in on the train platform to the right of track 1, you may catch a glimpse of the conductors in traditional uniforms.

Over the course of the day, you’ll see 33 eastbound and 33 westbound trains. For the majority of operating hours, TEXRail runs every 30 minutes – on the hour and half hour. Service is the same every day of the year, so if you miss seeing one, you won’t have to wait long to spot another!

This track is for TRE commuter rail, which links Fort Worth Central Station and Union Station in downtown Dallas. TRE, which features double-decker cars, is jointly owned and operated by Trinity Metro and Dallas Area Rapid Transit (DART). Like the Texas flag, the cars are red, white and blue – with a huge white star on the sides.

TRE operates different schedules on weekdays vs. Saturday, and it does not run on Sunday. On weekdays, you can spot 31 eastbound trains and 31 westbound.

Amtrak boards at Fort Worth Central Station. The Texas Eagle (Amtrak 21/421 and 22/422) and the Heartland Flyer (Amtrak 821 and 822) are on Track 3. The track that rises from Track 3 is where the Heartland Flyer leaves for Oklahoma City after a very short backup move.

There are numerous freight trains throughout the day and night on the remaining tracks to the left of your screen. These freight trains moving away from the camera are heading west toward Tower 55. You will see Burlington Northern Santa Fe (BNSF) and Union Pacific (UP) on these tracks, traveling to or from Tower 55.

You may observe both TEXRail and TRE trains continuing from Central Station to a terminus at the original Texas and Pacific Railroad station (now the Fort Worth T&P Station), less than one track-mile west.

Tower 55, one of nation’s busiest rail intersections that connects freight and passenger trains, is off to the right of this picture, but it is out of sight.

Fort Worth’s Hole-in-the-Wall is also nearby, but not in the picture. This was a choke point for several railroads and utilities, and it was a major challenge to TEXRail during the construction phase.

Trinity Metro’s successful on-demand rideshare service is expanding once again with the launch of the new Southeast ZIPZONE on June 1. This region will utilize one of the agency’s 14-passenger vehicles.

The vehicle will provide service in the new zone, which includes Tarrant County Resource Connection, Fort Worth VA Clinic, plus an array of shopping and dining options.

Southeast ZIPZONE will operate 7 a.m.-7 p.m. weekdays. To introduce the service, Trinity Metro will offer free rides on the new ZIPZONE through June 30.