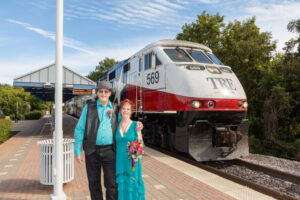 (FORT WORTH, TX – Oct. 18, 2021) – For James McNair and Elizabeth Leamon, love struck when they least expected it. The setting wasn’t on a moonlit beach or a romantic restaurant – it was on the Trinity Railway Express platform at Bell Station.

James and Beth first became acquainted in June 2015 while waiting on the TRE to commute to work. He traveled to Fort Worth while she was headed to Dallas. Being a passenger for many years, Beth always had “her spot” on the platform and was familiar with the usual morning crowd. One morning, she noticed someone different was waiting nearby. James did not catch her eye, and for several mornings they didn’t speak.

When they began conversing, it was casual and friendly. After several weeks of morning conversations, romance began to bloom and a growing fondness was evident. They started arriving even earlier (like 5:30 a.m.) for their scheduled departure and would bring each other treats such as a snack or drink.

James mentioned that his birthday was Aug. 1, and Beth took the opportunity to ask him out to dinner for his birthday. They had a romantic dinner and confessed their love for one another. 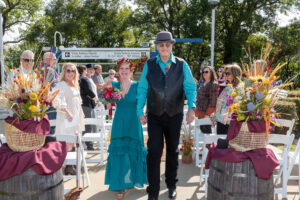 It’s fitting that the couple met at “Bell” because “wedding bells” were soon in the air. The Bell platform was where they first hugged, where they visited on their first anniversary, and it’s where James proposed last October.

On Oct. 17, the romance came full circle when Beth and James were married on the Bell platform.

“When we got engaged, we didn’t even have to think twice about where we would get married,” Beth said. “So many of our memories are connected to the train station that we couldn’t think of a more perfect – or romantic – venue!”