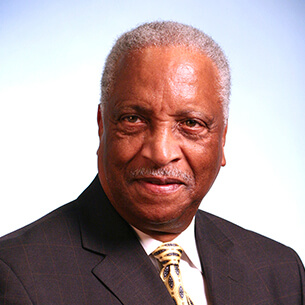 With great sadness, Trinity Metro delivers the heartbreaking news of the death of our former Board Member, community leader and friend, Dr. Dennis Dunkins. On behalf of all of Trinity Metro, we send our most heartfelt condolences and sympathy to his family.

Dr. Dunkins served on the Trinity Metro Board of Directors for many years representing city council district 5. He was appointed on Feb. 6, 2013 and remained on the board through September 2020. His service to Trinity Metro included participation on the Commuter Rail Committee from 2014-2020 during which he led the committee as the chairman in 2017. He was also the Board of Directors Secretary from 2017-2019, served as the ACCESS Committee Chair and had been active on the Scholarship Committee, TRE Advisory Committee, Rail Working Group, and the Planning, Operations and Marketing Committee.

Dr. Dunkins will be deeply missed. During his time on the Board, Trinity Metro saw tremendous growth and change including a major commuter rail project with the construction and opening of TEXRail in January 2019. He was instrumental in the development of fixed bus route 28/Mansfield Hwy and he proudly promoted Trinity Railway Express (TRE). His love for transit was contagious and he was passionate about the quality of Trinity Metro’s services, continually advocating for positive customer experiences. He loved riding trains, particularly TRE and truly did use public transportation in his day-to-day life. He always had a smile for everyone and was highly regarded by those who had the opportunity to meet him.

This is truly a great loss to Trinity Metro and the surrounding community as a whole. He will be profoundly missed by everyone whose lives he touched.