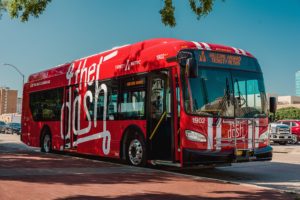 (FORT WORTH, TX – May 20, 2019) The Dash, Trinity Metro’s new electric bus, will make its debut at a media event at 10 a.m. Tuesday, May 21, at the Kimbell Art Museum, 3333 Camp Bowie Blvd. Attendees will have the opportunity to tour the bus and enjoy a short ride.

The event will start outside the east entrance of the Kimbell Art Museum’s Louis I. Kahn Building, located off Van Cliburn Way.

When the service begins, the Dash will operate from downtown Fort Worth to the city’s cultural district along the 7th Street corridor and will include a stop at the new Dickies Arena.

“We will be testing this new technology throughout the summer,” said Wayne Gensler, vice president and chief operating officer for bus and paratransit. “Everyone will be seeing these distinctive red buses soon. We’re very excited to connect these two areas of the city, and we expect the route to be very popular with both residents and visitors.”

One bus and a charging station have been delivered to Trinity Metro. The three remaining buses are expected to arrive by the end of May. Service for The Dash will begin Sept. 22.

“The Dash is truly a team effort,” said Bob Baulsir. “We’re appreciative of the many groups in the community that are helping launch this partnership. We’re also thankful to the North Central Texas Council of Governments for providing the grant funding for the electric buses.”

Community investors that have made a three-year financial commitment in The Dash service include the City of Fort Worth, Blue Zones Project – Fort Worth, Real Estate Council of Greater Fort Worth, and Visit Fort Worth.

When The Dash is in service, the fare structure will be same as other local buses: $2 one way or $5 for an unlimited-ride day pass.

All Trinity Metro bus operators will be trained on the new electric bus prior to the launch of service.

About the Kimbell Art Museum

The Kimbell Art Museum, owned and operated by the Kimbell Art Foundation, is internationally renowned for both its collections and its architecture. The Kimbell’s collections range in period from antiquity to the 20th century and include European masterpieces by artists such as Fra Angelico, Michelangelo, Caravaggio, Poussin, Velázquez, Monet, Picasso and Matisse; important collections of Egyptian and classical antiquities; and the art of Asia, Africa and the Ancient Americas.

The museum’s 1972 building, designed by the American architect Louis I. Kahn, is widely regarded as one of the outstanding architectural achievements of the modern era. A second building, designed by world-renowned Italian architect Renzo Piano, opened in 2013 and now provides space for special exhibitions, dedicated classrooms and a 289-seat auditorium with excellent acoustics for music.