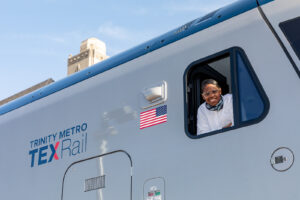 (FORT WORTH, TX – April 18, 2022) – Trinity Metro TEXRail is proud to announce the promotion of Brittany Cain, the second female engineer for the commuter rail line between Fort Worth and DFW Airport.

“It hit my radar the more I worked on the train,” she said. “I had been a conductor for more than two years and I wanted to challenge myself in a new role.”

“Diversity is essential to our culture and we’re celebrating this trend of promoting female engineers at TEXRail,” said Jon-Erik “AJ” Arjanen, vice president and chief operating officer for rail at Trinity Metro. “The rail industry, from an operations perspective, is largely male-dominated, so we’re extremely excited and proud of Brittany’s promotion.”

Doug Bourne, general manager with Herzog Transit Services, Inc., praised Cain for her accomplishment. “Brittany is a great asset to TEXRail, and her achievement will likely inspire other women to become railroad engineers.”

As part of her training to transition to the engineer position, Cain completed 40 hours of classroom training and 180 hours at the controls. Prior to working on TEXRail, she served in the United States Army for 12 years.