(FORT WORTH, TEXAS) Jan. 16, 2019 – North Texans gave TEXRail a warm welcome during the commuter rail line’s opening weekend, Jan. 12-13. More than 11,000 riders experienced the new TEXRail train that travels across a 27-mile route from downtown Fort Worth to Dallas Fort Worth International Airport’s Terminal B. 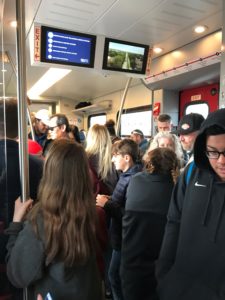 “We couldn’t be more pleased with the ridership numbers,” said Trinity Metro President/CEO Paul J Ballard. “We anticipated a strong turnout, but the number of riders exceeded our expectations.”

Numbers from the weekend show that some of the most popular places to board were the Fort Worth Texas & Pacific (T&P) Station, Grapevine/Main Street Station and DFW Airport Terminal B Station. The Downtown ITC/Fort Worth Station and North Richland Hills/Smithfield Station also reflected strong ridership

“From the feedback we received, riders were trying TEXRail for a number of reasons,” Ballard said. “Some were taking day trips with their families, and others were testing out the route in anticipation of commuting to work during the week. We also saw travelers with luggage going to or from the airport.” 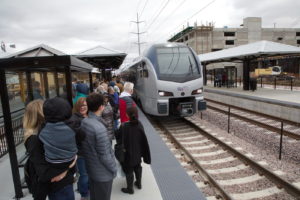