(FORT WORTH, TEXAS) Dec. 17, 2018 – The Trinity Metro Board of Directors has named Robert Baulsir as the agency’s new president and chief executive officer, effective April 15, 2019.

Baulsir, who currently serves as senior vice president, has been instrumental in keeping the TEXRail project on schedule and under budget. In addition to his oversight of the new commuter rail line, Baulsir is also responsible for procurement, facilities management and information technology. 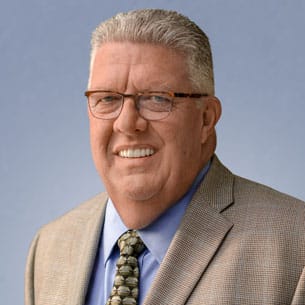 Board Chair Scott Mahaffey said Baulsir is the ideal choice for this role. “No one is more suited to step in and lead Trinity Metro into the future. We have the rare opportunity to promote from within and to benefit from Bob’s vast experience and expertise,” he said.

“The board feels that Bob Baulsir has been preparing for this role in the four years that he and Paul Ballard worked together at Trinity Metro,” Mahaffey said. “Their focus and planning has been in sync, and we know Bob can carry that vision forward to benefit our region.”

Trinity Metro President/CEO Paul Ballard, who is retiring in April, supports the board’s decision. “Bob is an integral part of our leadership team, and I can’t imagine anyone more suited to move into this role,” he said. “Shortly after I moved to Fort Worth, I recruited Bob to serve as vice president and project director of TEXRail. I knew he was the right person for the job then, and I feel the same way now.”

Baulsir has more than 30 years of transit experience, including overseeing rail development, construction, rail facilities and bus rapid transit. He has managed transit system procurement, operations and maintenance facilities, and safety and security. Prior to joining Trinity Metro in 2014, he served as General Manager of Administration for the Nashville MTA and the Regional Transportation Authority of Middle Tennessee. Baulsir also worked in public agencies in New York and Ohio. He earned a Bachelor of Science degree in business management from the University of Phoenix.