(FORT WORTH, TX – Feb. 28, 2020) – Congresswoman Kay Granger announced Friday that Trinity Metro is authorized to use remaining federal funds from the TEXRail project for an extension of the commuter rail line. The 27-mile route was completed on time and $80.6 million under budget, with roughly half of those funds coming from federal and half from local.

The $38.9 million in federal funds can now be used to extend TEXRail another 2.1 miles from the Fort Worth T&P Station to a new station in the Medical District. In 2016, Trinity Metro and the Federal Transit Administration (FTA) of the United States Department of Transportation signed a $499.39 million Full Funding Grant Agreement for the $1.034 billion TEXRail project.

The new station will be located behind Baylor Scott & White All Saints Medical Center, by the Mistletoe neighborhood.

Trinity Metro President and CEO Bob Baulsir shared his excitement about the expansion. “The Fort Worth Medical District is an ideal location for the next station because of the 40,000 people who work and visit that area. Extending TEXRail is perfect for medical professionals, patients and visitors.”

“We appreciate the FTA for allowing us to use the unspent funds toward expanding our TEXRail line,” said Trinity Metro Board Chairman Jeff Davis. “The support of Kay Granger and our other congressional delegates has meant the world to us.”

A timeline for the extension has not been determined. Baulsir said the first steps will be to define the scope and to undergo a competitive process of bids.

TEXRail began operating in January 2019, and the existing route runs between downtown Fort Worth and the Dallas Fort Worth International Airport’s Terminal B. The line has nine stations in Fort Worth, North Richland Hills and Grapevine. 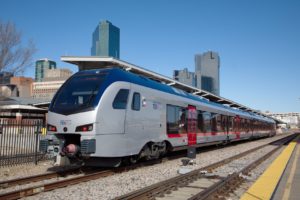