More than a half million rides and miles traveled on TEXRail since Jan. 10, 2019

On Jan. 10, Trinity Metro TEXRail will celebrate one year in operation, providing a comfortable and convenient ride between downtown Fort Worth and Dallas Fort Worth International Airport’s Terminal B. 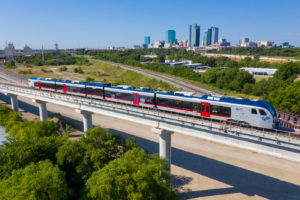 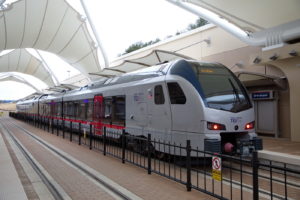 that the train is going to pick them up on time and take them safely to their destination as scheduled,” Arjanen said. “If you’re traveling to the airport to catch a flight, you don’t want to worry about when you’ll arrive.”

“We found that more business and leisure travelers are choosing to leave their cars at home and not worry about getting stuck in traffic,” Arjanen said. “In 2020, we expect our commuter base to grow as more companies take advantage of the 25 percent discount we offer through our EasyRide program.”

To put the one-year anniversary in perspective, consider the number of miles TEXRail has traveled since beginning operations. Between Jan. 10, 2019, and late July, the trains traveled 230,442 miles between Fort Worth T&P Station and DFW Airport Terminal B Station. Frequency increased to 30 minutes during peak travel times late in July. From that point through Jan. 10, 2020, the mileage is 297,594.